High blood pressure: the tip of the metabolic iceberg?

If you have hypertension, it could be a sign that other, more serious conditions exist or may arise

I want to share with you an interesting conversation I had with one of my patients who presented with high blood pressure.  I hope the conversation can give you a clear insight on how to approach hypertension in a safe and effective way.  The important question is always, am I dealing with isolated hypertension or a full-blown metabolic syndrome?

I also want to give advice on where to seek help.  I know when it comes to health, you would like to see the best specialist – the Harley Street cardiologist to control your blood pressure or the lipid clinic to sort out your high cholesterol – but sometimes a holistic doctor may be the shortest route to achieve all of your goals and may help you to prevent further problems in the future.

Jack is a highly successful 46-year-old businessman.  He was diagnosed with high blood pressure a couple of years ago, and he attended the Vitality Clinic hoping to find a natural remedy.

Jack was brought up in a happy family in South London.  His father was very supportive and would motivate his children to behave well, by offering sweets and chocolate.  As a consequence, Jack has multiple silver dental fillings and a small pot belly!

Jack described his work as very stressful.  He has to travel frequently and keeps unsocial hour every day.  He has to stay up late at night sorting out business issues and therefore regularly eats in restaurants or indulges in fast food, such as KFC, fish and chips and curries.  He also had a poor snack selection of crisps, crackers and chocolate bars.  He enjoys a few glasses of red wine late at night.  And he was even more stressed when having to manage a family breakdown.

Avoiding drugs’ side effects such as sexual dysfunction was a motivation

Jack was on blood pressure pills that included amlodipine 10mg once daily, which gave him swollen ankles, and atenolol 100mg a day, which resulted in fatigue and sexual dysfunction.  Avoiding the drugs’ side effects was the main reason behind him seeking a natural blood pressure remedy.

He weighed 92kg, was 170cm tall and his BMI was 31.8 (obesity range); waist size was 42 inches, hip 41 inches, making his waist-hip ratio (WHR) extremely high at 1.02 (normal <0.90.)  He had 6 dental mercury fillings with receding and mildly inflamed gums.  Pulse 62 beats per minute, blood pressure 153/98. Chest examination was essentially clear but, palpating the abdomen, I could feel an enlarged liver 3cm down the rib cage which was slightly tender.  Examination of the nervous system was unremarkable, apart from the fact that Jack was slightly unsteady during the toe-to-heel straight line walk.

At the end of the examination, I relayed my clinical impression to Jack, saying: “This is not simple, isolated high blood pressure; this is a full-blown metabolic syndrome.”

Jack was shocked to hear that and, with a serious look on his face, he hesitantly said: “What does that mean?  Is it a serious condition?  What can I do about it?”

What is metabolic syndrome?

Metabolic syndrome is a cluster of health risk factors that include belly fat, high blood pressure, high blood sugar, high triglyceride (fat) and low HDL (good cholesterol.)  You need to have three out of the five risk factors to qualify for this diagnosis.

However, despite its complexity and its multiple components, metabolic syndrome is absolutely reversible, through the adoption of a healthier lifestyle, with a better diet, good physical activity and lower levels of stress.

How does metabolic syndrome develop?

Metabolic syndrome implies that we have taken far more energy than we need.  The body stores excess calories as fat in adipose (fat) tissue under the skin.  When the usual storage space in the lower body is full, further calories are stored in the upper body as fat in visceral organs such as the liver and pancreas, resulting in a loss of function in these vital body parts.

This explains why having a pear body shape is protective against diseases while an apple configuration increases your risk of chronic illness.

Depending on your capacity to store fat under the skin, you can develop metabolic syndrome.  For example, South Asians have a lower body fat storage capacity.  This increases their risk of disease at a lower BMI level.  Hence, their BMI classes were adjusted to 23.0 to 27.9 as overweight and 28 and over is obese. 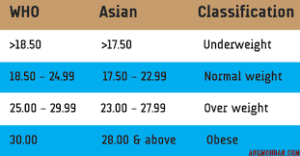 Fat accumulation in body cells causes insulin resistance: when you eat, your blood sugar goes up; this stimulates the pancreas to produce insulin, the hormone that opens the door for sugar to enter your cells; and when insulin knocks on the cell door, asking if sugar supply is needed, the cell with stored fat would answer, no thanks, we have enough energy.

Stored fat is metabolically active.  It produces inflammatory cytokines, resulting in low-grade chronic inflammation, the culprit of insulin resistance and vascular disease.  It also produces angiotensinogen, which, when activated, becomes the recipe for high blood pressure.

Have I got metabolic syndrome?

Applying the metabolic syndrome test early would identify patients at risk of diabetes and cardiovascular disease, a good strategy to prevent serious disease.

The simple way is to examine your body weight, height and body mass index (BMI.)  More accurate is to assess your body shape (apple or pear) as described above.  You can also measure it: a waist circumference of more than 40 inches in men and more than 35 inches in women is abnormal.  More accurately, a waist-hip ratio (WHR) of >0.90 in men and >0.85 in women is suggestive of fat accumulation in abdominal organs.

You can also do a glucose tolerance test (GTT), which detects abnormal blood sugar 120 minutes after the ingestion of 75g of sugar.  Fasting insulin levels can detect insulin resistance earlier, a level >5 being suggestive.

You can even detect a trend for insulin resistance at an early stage on low adiponectin or a high HOMA-IR.  The latter reflects a combination of fasting insulin and fasting glucose.

A definite confirmation of metabolic syndrome should motivate patients to take appropriate steps to reduce their risk of diabetes and vascular disease, preventing these more serious conditions by taking simple steps like eating a healthy diet and increasing physical activity.

Blood pressure: the tip of the metabolic iceberg

My patient (Jack) attended the clinic looking for a natural remedy to control his blood pressure.  He wanted to replace the pharmaceutical agents that gave him unacceptable side effects – ankle oedema, general fatigue and sexual dysfunction.  After a little persuasion, Jack agreed to do something about his weight, as the initial assessment showed a very high BMI of 31, within the obesity zone. 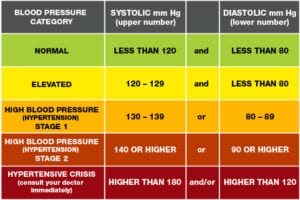 I then proceeded to explain to Jack that the two components of the metabolic syndrome that he was fixated on were the least important in the proper clinical management of his condition.  I explained that a family history of vascular disease made him more prone to a serious illness   I was glad that Jack attended the clinic early and will do all he can to prevent any possible complications in the future.

This was too much for Jack to assimilate at one time.  I realised that he was able to see only the tip of the iceberg.  Hence, I decided to start provisional management and request some more tests to make it easier for Jack to see with his own eyes how large and serious the problem “under the water” really was.

I put it to Jack that I was more concerned about another three features of the syndrome.  These were insulin resistance (the hallmark of the metabolic syndrome), his pro-inflammatory state (the tendency for inflammation) and his prothrombotic state (the tendency for blood clotting). Inflammation and the tendency to make clots in the circulation are the recipes for vascular disease and their serious complication such as heart attack and stroke.

Insulin resistance, together with hyperinsulinemia, directly causes other metabolic risk factors.  Insulin resistance can be a problem even in the mildly to moderately overweight.  It can happen in south Asians with a BMI of less than 25.

At a very early stage, insulin resistance can be detected by low adiponectin and raised HOMA-IR.  A bit later by raised fasting insulin while the blood sugar is still normal.  Accumulation of fat in the liver and muscle predisposes the patient to glucose intolerance, which manifests late with blood glucose above the normal range.

The proinflammatory state is a low-grade chronic metabolically triggered inflammation.  It is detected as high-sensitivity CRP, a marker to predict coronary heart disease and recently used as a predictor for non-alcoholic fatty liver disease.  Adipose tissue in obese people with metabolic syndrome releases cytokines into the circulation to stimulate the production of CRP by the liver.  Again, insulin resistance may trigger the production of inflammatory cytokines.

Generally, metabolic overload evokes several stress reactions including inflammatory and oxidative stress.  A study confirmed elevated homocysteine in metabolic syndrome hypertensive patients.  The prevalence of events increases with higher homocysteine levels.  This suggests that homocysteine could contribute to vascular disease in these patients.

The risk of thrombosis is significantly increased in abdominal obesity that results in the activation of the coagulation system.  This enhances the generation of thrombin (which converts fibrinogen to fibrin), diminished fibrinolysis (that breakdown clots in the circulation) and increased platelet aggregation (to make a clot.)  Hypercoagulability is characteristic of metabolic syndrome.

A study on metabolic syndrome cases showed 50% of them had deep vein thrombosis.  Another study found procoagulant factors VII and X, anticoagulant proteins C and S, and PAI-1 correlated directly with central body fat but inversely with insulin sensitivity.

Jack managed to persuade his son to take over a bigger role in running the business; he attended a marriage councillor, reduced his alcohol intake, cleaned up his diet, increased his physical activity and reduced his stress levels.  He got his weight down by 18kg (3 stones) to 74kg, resulting in a nearly normal BMI of 25.6.  Blood pressure normalised at 119/75 on no medication. 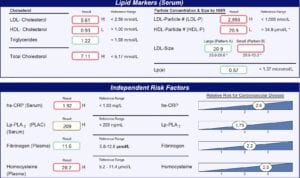 This confirms that metabolic syndrome responds to the lifestyle interventions of weight reduction, adopting a healthy diet, good physical activity, getting an adequate night’s sleep and reduced stress.  This leads to improvement in multiple features of metabolic syndrome at the same time.

Here was a patient who had been treated for high blood pressure alone, but who, on clinical assessment and subsequent tests, was confirmed to have the full-blown metabolic disease with five components – obesity, hypertension, high triglyceride, low HDL and fatty liver.

The test results also confirmed insulin resistance, a high level of inflammation, and a high tendency to make blood clots.  He was headed for heart disease, cerebrovascular disease, chronic kidney disease and more.

High blood pressure can sometimes be the only part of the chronic medical iceberg that is above the surface, with the potential for serious complications like heart attack and stroke lurking beneath.

In Jack’s case, six months of lifestyle management have seen all of his symptoms and results improve.

So, my friends, I hope you can see the importance of finding out whether your hypertension is really metabolic syndrome, and, if so, getting the right help to sort out this far-reaching health problem.  Please do share your thoughts and questions by commenting on this piece, and do subscribe to the newsletter so that you don’t miss further vital information.  Thank you!

A comprehensive definition of metabolic syndrome

Adipose tissue and metabolic syndrome: too much or too little or neither

Inflammation and the metabolic syndrome