Histamine intolerance is easy to confuse with hay fever – but its symptoms, such as migraine, fatigue, congested throat, runny nose, itching, giddiness and IBS, can be resolved through dietary changes and supplements

If you suffer from recurrent migraine attacks, fatigue, runny nose, sinus issues, congested throat, hoarse voice, itching, feeling giddy or having symptoms of IBS, this article may give you a clue to one possible underlying cause for all these problems.

Jack, a 61-year-old gentleman, presented with frequent migraines associated with facial redness.  He often experienced palpitations, light-headedness, and giddiness.  He reported a runny nose and congestion of nose and throat, even more so after eating, giving him a permanently hoarse voice.  He also reported extensive body itching and an inability to relax.  He would stay wide awake for hours in bed at night before managing to sleep.  He also reported recurrent loose motions (diarrhoea) and bloating after eating.

Jack had had to visit several hospital departments.  He had attended the neurology clinic and was put on sumatriptan and a beta-blocker for his migraine.  He had also gone to ENT and, since his symptoms were not seasonal, he was given a diagnosis of non-allergic rhinitis.  Attending the gastrointestinal intestinal clinic, he was diagnosed with irritable bowel syndrome (IBS).  Jack was also investigated in the cardiology department with ECG and echo (heart scan) and was reassured that his tests were reported back normal.  Finally, in view of his significant anxiety, he was advised to see his GP for appropriate medication to settle this down.

Jack was frustrated that, after visiting four hospital departments and taking several different medications, he was still not feeling well.  He attended the Vitality Clinic, wondering if his multiple conditions were the result of a common triggering factor.

What is histamine intolerance?

Histamine intolerance is a non-immunological response to that chemical.  It occurs when the body is struggling to metabolise (breakdown) histamine, resulting in an accumulation of it in the body.  This usually happens after the ingestion of a histamine-heavy diet.  An excess can cause the wide range of symptoms experienced by Jack.  In females, these can also include irregular menstruation.  The symptoms can resemble those associated with hay fever – nose and throat congestion, sinus problems and fatigue – but with no seasonal triggering factor. 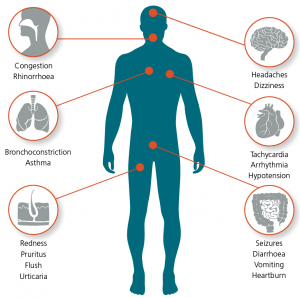 Some authors estimate that histamine intolerance affects 1–3% of the population, but this may increase with greater knowledge and more diagnostic tools.

What are the sources of histamine?

Histamine is a chemical, which is either produced in the body or enters the body in food.  The former is made in the body from protein (an amino acid, L-histidine) and stored in the white blood cells that mount the allergic response – eosinophils, mast cells and Basophils.

Individuals who cannot break down histamine in their intestines can become highly sensitive to normal or even low histamine in their food.  Histamine acts on various body receptors – H1, H2, H3 and H4.  Histamine stimulates H1 receptors, and this is what causes the skin itching and urticaria; H2 stimulates stomach acid (HCL) production; H3 receptors act mainly in the brain, where histamine acts as a neurotransmitter to regulate appetite and body temperature, causing patients to be fully awake and find it hard to sleep at night; they also influence cognitive function and behaviour.

In the heart, it causes tachycardia (fast heart rate) and hypotension (low blood pressure.)  In the lung, it causes bronchospasm (wheezing), skin itching and urticaria.

Where is histamine found in food?

Histamine belongs to the chemical group of amines in food.  There are two types – monoamines, like tyramine in grated cheese, and diamines, including histamine, putrescine and cadaverine.  The last two have the greatest influence on the metabolism of histamine because DAO (diamine oxidase) breaks them down preferentially.  Food high in diamine increases your risk of histamine intolerance and should be excluded from any low histamine diet.

Grilling or boiling aubergine and green beans increases their histamine content.  Grilling Seafood and meat has the same effect.  However, boiling reduces the histamine content of meat.  Boiling vegetables can either have no effect or reduce histamine marginally.

Histamine mediates the inflammatory response in various body systems.  An Australian study reported that histamine intolerance frequently results in gut symptoms, mainly bloating in 92% of patients, but also diarrhoea, abdominal pain, and constipation in 55–73%.  In the second place, as it were, impairments of the nervous and cardiovascular systems, such as dizziness, headaches, and palpitations, were recorded, followed by respiratory and dermatological symptoms.  Combinations of three or more symptoms involving different organs were recorded in 97% of cases, with an average of 11 symptoms per patient.

How does your body detoxify histamine?

As we have seen, histamine in food is broken down by an enzyme, DAO, produced from the small intestine lining.  Having excess histamine is, therefore, due to the high histamine content of the food ingested, combined with low or slow DAO activity.

As we have said, excess histamine can give allergic-like symptoms, but whereas hay fever, for example, occurs due to a reaction to common allergens such as pollen, grass, or dust, this is usually only triggered at specific times of the year.  Hay fever represents a true allergy, and its markers can be detected in routine blood tests.

Evidence in medical literature reports a link between the DAO genetic variant and an increased risk of migraine.  Also, alcohol blocks DAO, and non-steroidal anti-inflammatory drugs (NSAID) slow DAO activity.  Lack of certain nutrients, especially vitamin C, copper, and vitamin B6, do the same, as these co-factors are needed to produce adequate DAO activity.

Acquired DAO deficiency has also been linked to mucosal damage in the small intestine in patients diagnosed with nonceliac gluten sensitivity.  This may also occur after an episode of gastroenteritis or the diagnosis of irritable bowel syndrome; those with lactose intolerance may also have low DAO activity.  Drugs also inhibit DAO activity, and this has been traced to the anti-acid pill cimetidine, the antiarrhythmic verapamil, and antimalarial chloroquine.

Is there another way to break down histamine?

There is something else that breaks down histamine – an enzyme in the blood known as histamine N methyltransferase (HNMT.)  To do this, HNMT requires a small chemical group known as the methyl group.  People with a genetic variant such as MTHFR struggle to produce adequate methylation and hence are not good at breaking down histamine, leaving it to accumulate and cause problems.

Studies have found that healthy people have an abundance of a certain type of friendly and beneficial gut bacteria known as Bifidobacterium.  On the other hand, high levels of the notorious bacteria, proteobacteria, can predict dysbiosis (a poor gut microbiome profile) and impaired intestinal function.  Lactic acid bacteria such as Lactobacillus are also well known to produce histamine.

What should you do if you suspect histamine intolerance?

The lack of specific symptoms and a validated diagnostic tool prompt many affected individuals like Jack to consult several medical specialists in search of an explanation and find a solution for their distressing multi-system symptoms.

Initially, you need to rule out allergies, like hay fever, that share common symptoms with histamine intolerance.  And then, you need to check if you are taking any medication with a possible inhibitory effect on DAO activity.

Some patients who go on a low histamine diet (a duration of 4 to 8 weeks is recommended) experience a remission of their symptoms, which confirms their histamine intolerance.

The condition can therefore be managed with a low histamine diet, and giving DAO, the enzyme that breaks down histamine, as a supplement.

In addition, you should exclude food that contains putrescine and cadaverine, as these are metabolised preferentially to histamine by DAO.  These include certain cheeses, fermented meat, sausages and vegetables, and smoked fish.  Papayas, kiwis, strawberries, pineapples, and plums are also reported to trigger the release of body-produced histamine.

Along with these dietary measures, DAO supplementation supports the degradation of ingested histamine and is recommended in patients with DAO deficiency.  H1 or possibly H2 antihistamines can be used short-term.  The aim of the dietary approach is to develop a food habit that will avoid the triggering of symptoms in the future.

Histamine intolerance – the more we know the less we know. A review

Histamine intolerance: the current state of the art

Hay-fever vs histamine intolerance: what is the difference?