If doctors had to apologise about one medical condition, one where their patients are totally let down, it would be IBS – Irritable Bowel Syndrome.

Often patients’ complaints are not taken seriously.  They are left to struggle on their own with distressing and recurring symptoms.  They experience embarrassing accidents, often being unable to leave home because of the condition’s unpredictability.  They must move carefully, always needing to know the location of the nearest toilet.  They suffer insomnia.  Their condition frequently has severe psychological effects, such as anxiety and depression.  It can also result in serious nutritional deficiencies.

The problem goes back to medical school, where IBS is classified as psychosomatic.  This implies that it is not real, that there is no objective evidence to support a clinical diagnosis.

The standard care definition is that IBS is a functional disorder characterised by repeated abdominal pain and altered bowel habit (diarrheal or constipation), in the absence any detectable pathology.

As IBS is considered a psychosomatic disorder, conventional medicine focuses on treating symptoms rather than the underlying cause.  The medication prescribed includes antidiarrheals, anticholinergic, anti-spasmodic and antidepressants.

On the other hand, functional medicine looks upon IBS as an interesting multifactorial condition, one that should trigger a full investigation of the digestive system, including digestive function, the gut lining and the microbiome community composition.

Modern hi-tech tests, including GI effect and GI map, can assess the stomach acids and pancreatic enzymes.  Inadequate bile flow can result in fermentation of food elements, resulting in the symptoms of bloating, burping, discomfort and stomach cramps.  These can also include changes in bowel habits, and onward to the psychological symptoms of anxiety and depression.

This can be due to gut permeability, when undigested protein molecules can trigger a reaction and inflammation, leading to a leaky gut.  This makes it necessary to find out if there is intestinal damage causing permeability, and, if so, to use natural agents to deal with the underlying causes and to repair the gut wall.

The test would also review the full composition of the microbiome, and the agents would top up beneficial members, and remove pathogenic organisms.

Such tests provide a vast amount of information to help the functional practitioner discuss the condition with the patient, in order to create a comprehensive plan – what we call the 5Rs – to restore gut health.

It’s certainly not “all in the bowel”!

IBS can be caused by a change in the composition of the gut bacteria (dysbiosis), either a decrease in the level of good ones, such as lactobacillus acidophilus and bifidobacterial, or an increased level of the harmful ones, such as E. coli.  One course of antibiotics can destroy up to a third of healthy gut bacteria.  One in three cases of dysbiosis is related to foot poisoning or traveller’s diarrhoea.

This 47-year-old lady presented with severe bloating immediately after a meal, but not associated with indigestion or heartburn.  She felt hungry and suffered with constipation that lasted for days.

She had HB Pylori in 2017 with a positive breath test and was treated with two courses of antibiotics and pantoprazole.  She had right upper quadrant pain, and an abdominal ultrasound scan confirmed gallbladder polyp.  She had had several courses of antibiotics as a child and was treated for acne with steroids and prolonged antibiotics as a teenager.  She had received multiple steroid injections for joint pain.  She always looked pale but currently had darker skin.  She had received iron therapy for anaemia and low haemoglobin.

She experienced severe fatigue, her energy levels being 3 out of 10; she struggled to get up in the morning and felt very tired by 8pm.  She thought that her severe lack of sleep, and aches and pains, were pushing her to eat more and gain weight.

She only slept five hours a night, had difficulty staying asleep and did not feel refreshed in the morning.  She had a low mood, preferring to be by herself, was anxious, always expecting something bad to happen.  She also had severe stress related to family and social issues.

Suppressive displayers, which is when microbes produce toxins that suppress the immune function

Hypersensitivity is an exaggerated immune response to normal bacteria

Inflammatory can cause a reactive arthritis

The microbial composition either lives in symbiosis or dysbiosis.  In symbiosis, they produce short chain fatty acids, which help immune regulation and homeostasis, while dysbiosis causes immune deregulation and inflammation.

Altered barrier function mucosa in the community of microbiota contribute to the pathogenesis of chronic fatigue syndrome, possibly promoting the development of metabolic disorders.

Full testing to give a comprehensive account of your beneficial and pathogenic bacteria can give you a personalised diagnosis and a guide to which beneficial bacteria you need to add.  Treatment can include prebiotics and probiotics to actively assist healthy bacteria.

Another cause of IBS is the increase of bacteria that interfere with digestion and nutrient absorption.  This may be caused by PPI or stress.

This 27-year-old lady lived in a very mouldy and damp environment (black mould) for three years.  She had symptoms of bloating and gas now and again, and her SIBO test was positive for methane and hydrogen, but only positive for hydrogen after treatment with rifaximin and neomycin. 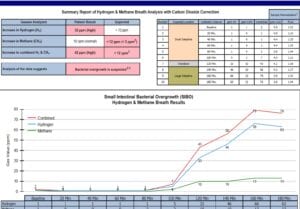 She felt dizzy, lightheaded and had panic attacks, and blood tests showed high inflammatory markers.  She had Raynaud’s Phenomenon (mainly in winter) and was diagnosed with autoimmune rheumatoid disease.

She experienced anxiety and extreme fatigue, often having to choose between going for a walk and washing the dishes.  Her skin was dry and she had an overactive immune system, flu-like symptoms and postnasal drip, with a swab showing heavy bacteria in her nose consistent with mould exposure.

She also presented with premenstrual symptoms from an early age, and lately had had an ovarian cyst and endometriosis, giving her severe abdominal pain.  Her gynaecologist prescribed contraceptive pills, which she took continuously.  She had a period once a year.

The large intestine is designed to accommodate a large diverse community of microbiota.  The small intestine is home to fewer bacteria, and this is where microbes feed voraciously on any carbohydrates they encounter, producing hydrogen or methane.  This can lead to bloating, distension and discomfort, and further to flatulence and heartburn.

IBS can also be due to food sensitivity and intolerances.  Bacteria ferment high FODMAP that include various sugars (oligo, saccharides, disaccharides, monosaccharides and polyols) to produce short chain fatty acids and gas, mostly CO2 and H2.  The gas causes distension, resulting in pain and bloating.  Fructose, lactose and polyol can draw water into the bowel which can result in diarrhoea.

The first stage is the elimination of high FODMAP, such as vegetables, onions, garlic, cabbage and broccoli, stoned fruit, apples, pears, cheese, sorbitol found in chewing gum and sugar-free dairy products.  The second phase is to slowly reintroduce FODMAP to see which you can tolerate. 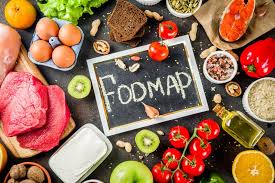 The role of the gut/brain axis

Anxiety and emotional stress can trigger IBS through the chemical signalling between the gut and the brain through the vagus nerve.  The myenteric nerves lie under the thin layer of mucus membrane, and pick up signals about how stressed, happy, sad or anxious we are.  The microbiome signals to our brain and modulates emotions, i.e. bad bacteria can cause stress and increase acid production.

The composition of your microbiome can either support your health or put you at risk of disease.

Bacterial overgrowth contributes to IBS in 78% of patients.

My recommended treatment is the 5Rs.  Remove bugs and candida, replace digestive enzymes, re-inoculate with probiotics, repair glutamine, zinc carnosine, and rebalance the mind and body with activities such as yoga.  Therapies that focus the attention, such as hypnosis or meditation, help to relieve IBS symptoms, whilst emotional distress worsen them.  Patients will only undertake such activities mindfully, if they understand the close connection between the gut and the brain.

And now, my friends, I would love to hear your stories – your experiences of success and failure – in relation to IBS.  Your journey may well help or encourage someone else suffering along the same lines.