Insulin: too much or too little can cause diabetes

In the 100 years since the discovery that has saved millions of lives, we are still finding out exactly how insulin works

Sunday 14th November was World Diabetes Day 2021 and represents 100 years since insulin was discovered.  But, confusingly, whilst type 1 diabetes means no insulin, type 2 means very high insulin!  What exactly do we know about its action, and how can we protect ourselves against diabetes being the outcome of us “getting insulin wrong?”

Insulin remains the only effective treatment for type 1 diabetes.  Before its discovery in 1921, it was exceptional for people with type 1 diabetes to live more than a year or two.  The advance was one of the greatest medical breakthroughs in history, saving millions of lives worldwide.

“Not a death sentence”

By 1920, scientists had discovered that insulin is produced by clusters of cells in the pancreas, given the name “islet cells,” which are destroyed in type 1 diabetes.  Attempts had been made to extract insulin but to no avail.

In October 1920, Frederick Banting, a Canadian surgeon, read that insulin-producing cells are slower to deteriorate than other pancreatic tissues.  On 7th November 1920, he paid a visit to Professor John McLeod, and they began to work together.

On 17th May 1921, they brought in a research assistant, Charles Best, with expertise in testing blood to check the glucose level.  This was vital because now they could demonstrate whether the insulin extracts were having any effect.

On 10th November 1921, 30 experiments on dogs were successful.  On 12th December 1921, a new team member, James Collip, a biochemist, joined the group to work on purifying insulin.

On 11th January 1922, insulin was first used on a human being.  Leonard Thompson, a 14-year-old boy dying from type 1 diabetes, became the first person to receive an injection of insulin.  In 24 hours, his dangerously high blood sugar level dropped, but he developed an abscess at the site of the injection.  Leonard was given a second injection on 23rd January, and this time it was a complete success, and his level plummeted to near normal with no obvious side effects.

For the first time in history, type 1 diabetes was not a death sentence.

By May 1922, insulin was being produced on a mass scale, with Eli Lilly becoming its first manufacturer.

On 25th October 1923, Banting and Macleod were jointly awarded the Nobel Prize for Physiology or Medicine in recognition of their life-saving discovery.  Banting split his half of the prize money with Best, and Macleod split the other half with Collip. 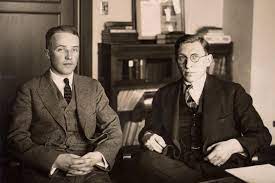 There are THREE types of diabetes

Type 1 diabetes is an autoimmune disease when the insulin-producing cells in the pancreas are destroyed, and the body cannot produce insulin.  Type 1 is typically diagnosed in early childhood and hence also called juvenile-onset diabetes.

In type 2 diabetes, the body is resistant to the action of insulin.  This prompts the pancreas to work harder, producing increasing amounts of insulin.  Type 2 is more common in adults and hence referred to as adult-onset diabetes.

Type 1 cannot turn into type 2 diabetes, but it can be misdiagnosed as type 2.  This happens in a few patients who present with symptoms of type 2 but more accurately have another condition closely related to type 1.  This is known as latent autoimmune diabetes in adults (LADA), which falls between the two types and hence is often referred to as type 1.5 diabetes.

Patients with LADA continue to produce insulin initially and respond to diet, exercise and oral diabetic pills.  The diagnosis is usually suspect when they become unresponsive to diabetic pills or an adjustment in lifestyle.

In LADA, the insulin-producing islet cells of the pancreas are destroyed very slowly.  The pancreas continues to produce insulin for several months to several years before it ceases completely.  LADA affects diabetics who are not overweight and do not have other metabolic risk factors, such as high blood pressure or high triglycerides, but they test positive for antibodies against the insulin-producing pancreatic islet cells.

These patients present with symptoms similar to those of type 2 diabetes, including polyuria (excessive urination), polydipsia (excessive thirst), blurred vision, high levels of sugar in their blood and urine, dry skin, fatigue, tingling sensations in hands or feet, and frequent urinary and skin infection.

Treatment of LADA is similar to that for type 2 diabetes, including diet and exercise to adjust weight and oral diabetic medication, but patients also need insulin injections.  The effectiveness of their diabetic control is measured by regular checks of their HbA1C level.

So, if you are diagnosed with type 2 diabetes and you continue to struggle to control your blood sugar despite improving your lifestyle and taking diabetic pills, remember that there is a very small chance that you may have LADA (type 1.5 diabetes).

Please contact your doctor to explore this possibility through a GAD antibody blood test.  They can also check if your pancreas produces insulin by checking your C-peptide.  If you do get this diagnosis, then you need to go on long-term insulin, alongside your lifestyle management.

How does insulin actually work?

Elevated levels of glucose in blood stimulate the release of insulin from the pancreas.  Insulin acts on cells throughout the body to stimulate the uptake, utilisation and storage of glucose.

Insulin facilitates the entry of glucose into muscle, liver, and adipose tissue, among many others.  Glucose is taken by the physiological process of facilitated diffusion via a transporter system known as GLUT4, triggered by the action of insulin.

Insulin touches the insulin receptor on the cell surface (knocks on the door, so to speak).  The cell responds only when energy stores are low by prompting GLUT4 to move to the cell membrane to “open the door” for glucose to enter.  Thus, insulin resistance can be seen as a protective mechanism (see below).

Insulin stimulates the liver to store glucose in the form of glycogen.  On reaching the full capacity of glycogen storage (5% of the liver mass), further glucose is shifted to make fatty acids stored in the body as triglycerides.  Insulin also stimulates the uptake of amino acids to make proteins.

As an anabolic hormone, insulin stimulates cell division and repair.  In this respect, it promotes the synthesis of cholesterol necessary for building the cell membrane, resulting in high cholesterol and triglycerides. 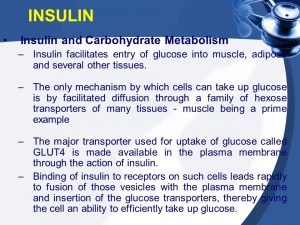 What is “the silent disease?”

High insulin (hyperinsulinemia) means that the amount of insulin in your blood is higher than normal.  This is most often caused by insulin resistance — a condition in which your body does not respond well to the effects of insulin.  Your pancreas compensates by making more insulin.  Insulin resistance may eventually lead to the development of type 2 diabetes.  This happens when your pancreas is no longer able to compensate.

However, dysregulated hyperinsulinemia (defined as elevated circulating insulin in relation to its usual level relative to blood glucose) does not cause hypoglycaemia.  And it is common in obesity and metabolic disorders.

Hyperinsulinemia usually causes no signs or symptoms and is hence referred to as the silent disease, except in people with insulinoma.

Treatment of hyperinsulinemia should be directed at the underlying problem.

How do you know you’ve got it?

There are several common manifestations of hyperinsulinemia.

You can have too much of THIS good thing

Insulin is an anabolic hormone so that levels that are either too low or too high are detrimental to the physiological balance.  The glucoregulatory activity of insulin is mitigated during hyperinsulinemia by the dampening of the efficacy of insulin signalling.  Because of this, hyperinsulinemia increases the risk of obesity, type 2 diabetes, cardiovascular disease, correspondingly decreasing health span and life expectancy.

High insulin suppresses Nrf2 (the cell-protective system), and hence hyperinsulinemia increases the susceptibility of said rusting.  This explains why hyperinsulinemia and insulin resistance promote hypertension and cholesterol plaques in arteries.

In addition, insulin increases the production of nitric oxide (NO), a molecule produced by the endothelial cells (arterial lining cell) to maintain the vessel function, including the relaxation of the smooth muscle layer.  However, this mechanism is suppressed by hyperinsulinemia, making insulin resistance a major risk factor for hypertension and cardiovascular disease.

Endothelial dysfunction not only suppresses NO production but also promotes the influx of calcium and iron into the smooth muscle layer, resulting in a further increase in vascular tone and stiff arteries.  High insulin levels also enhance the absorption of sodium in the kidney, again promoting the development of hypertension.

The solution: fasting and food, but NOT fast food

You can lower circulating insulin levels by restricting the exposure of the islet cells to glucose.  One option is limiting calorie uptake, either continuously through a dietary overhaul or during defined periods of the day or week through fasting.  Bariatric surgery and gastric bypass lead to the rapid regression of hyperinsulinemia and insulin resistance, with substantial benefits in health outcomes and mortality.

The most effective way to avoid hyperinsulinemia and thus insulin resistance is to focus on a low glycaemic diet, excluding simple sugars and processed carbohydrates, and including lots of fibre with fruits, vegetables, beans, nuts and seeds.  We should also increase our insulin sensitivity (as opposed to resistance) through a combination of cardio and resistance training, together with restful sleep, lowering stress levels, enjoying more sunshine, and having a purpose in life, along with loving relationships. 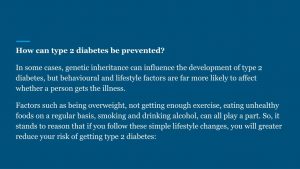 As always, my friends, please share your thoughts and ask any questions on this subject, and please do subscribe to the newsletter so that you don’t miss further vital information.  Thank you!

Insulin: too much of a good thing is bad

Is it possible for type 2 diabetes to turn into type 1?

Hyperglycaemia and insulin resistance and the risk of BPH/LUTS: an update of recent literature