By analysing the lifestyles of the world’s oldest surviving people, we can discover their secrets to living longer, and living healthier

On the Greek island of Icaria, they consume 6 teaspoons of olive oil a day.  On Sardinia, they farm in the mountainous countryside.  In Okinawa, they practise tai chi.  In Nicoya, their staple diet is beans.  And Loma Linda, California, is a devout religious community with strong family ties.

What do all of these regions have in common?

They are all blue zones – the term given to places home to the world’s oldest people, with the highest rates of nonagenarians and centenarians (over 90 and 100.)

Of course, it is not all down to just one healthy habit.  On Icaria, for example, they follow the Mediterranean diet, with lots of homegrown vegetables and olive oil.  On Sardinia, they live in the mountains, work on farms, and drink lots of red wine.  In Okinawa, Japan, they eat soy-based food as well as practising tai chi.  On the Nicoya peninsula, they perform physical jobs into old age and have a sense of life purpose, alongside their diet of beans.  And in Loma Linda, this religious group are strict vegetarians and live in small, very well-connected communities.

Genetics only play a 20 to 30% role in such longevity.  People in blue zones generally eat whole food, locally produced (within 10 miles of their home), and drink water (not soft drinks), tea, coffee and wine. 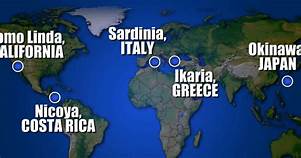 Whole food is made of a single ingredient, with an average of six ingredients blended to make a meal.  The best longevity food includes leafy greens, such as spinach, kale, beet and turnip tops.  Middle-aged people in the blue zones consume around six teaspoons of olive oil daily.  And there is evidence in medical literature to suggest that olive oil increases good cholesterol and lowers bad.

They eat the whole food that is raw, cooked, ground or fermented, but not highly processed.  They eat raw fruit and vegetables; they grind whole grains and cook them slowly; and use fermentation to increase the bioavailability of nutrients in their tofu, sourdough bread, wine and pickled vegetables.

They have the habit of sipping water all day to keep hydrated.  Studies show that being hydrated increases blood flow, preventing clots, which cause acute vascular events such as stroke or heart attack.

Sardinians, Icarian and Nicoyans drink copious amounts of coffee.  Research indicates that this prevents dementia and Parkinson’s disease.  Okinawans drink green tea all day, rich in antioxidants, known to lower the risk of heart disease and cancer.  They drink a brew of rosemary, sage and dandelion, all known to have anti-inflammatory properties.

People in the blue zones also drink 2 to 3 small glasses of red wine a day, during meals and with friends.

Bread in the blue zones is made of whole grain or sourdough.  Whole grains include wheat, rye or barley with a wide spectrum of nutrients, including amino acids such as tryptophan minerals selenium and magnesium, as well as high levels of fibre.  This traditional bread is made with naturally occurring lactobacillus bacteria, which digests starch and gluten while making the bread rise.

Sourdough bread contains less gluten and has a pleasant taste and a lower glycaemic index, yielding calories to produce energy rather than being stored as fat.  This compares with commercial bread made from white bleached flour, which metabolises quickly into sugar and so spikes insulin levels.

People in the blue zone snack on two handfuls of nuts per day, including almonds, pistachios, peanuts, brazil nuts, cashews and walnuts.  All these are likely to lower your cholesterol, with one study finding that nut-eaters outlive non-nut-eaters by an average of 2 to 3 years.

Beans are the cornerstone of every longevity diet, including black beans, white beans, kidney beans, lentils and soybeans.  Beans are 21% protein and 77% complex carbohydrates, rich in fibre.  They are digested slowly for slow and steady energy release.  Beans are the staple diet in all five blue zones, with a daily average of half a cup per day.  They are a satisfying food, as well as providing most of your vitamin and mineral needs.

Blue zone people eat eggs 2 to 4 times a week from free-range chickens, who themselves eat a variety of natural food (no hormones or antibiotics), naturally higher in omega 3 fatty acids.

No one is lactose-intolerant here

People in blue zones ferment goats’ and sheep milk to make yoghurt and cheese.  Although goats’ milk contains lactose, it also contains lactase, an enzyme that helps the body to digest lactose.  This is compared with cows’ milk, which is high in fat, sugar and lactose, but which does not figure in blue zone diets.  60% of people have difficulty digesting lactose.

People in the blue zone eat three small servings of fish (up to 3 ounces) per week, including sardines, anchovies and cod, all high in omega 3 fatty acids and less exposed to mercury and other chemical pollutants.

The average person there eats 2 ounces or less of meat five times per month.  The Adventist health study found that the people who lived the longest were vegan or Pescatarian vegetarians, eating plant-based diets with a small amount of fish.

You too can live longer

Eating five servings of fruits and vegetables reduces your risk of heart disease, cancer and death.  Legumes, including beans, peas, lentils and chickpeas, are associated with lower mortality.  Nuts are a great source of fibre, protein, monounsaturated and polyunsaturated fatty acids: they are associated with reduced mortality and may help to reverse Metabolic syndrome.

Fewer calories may also contribute to the longer lives in the blue zones.  Okinawans before the age of 60 are in a calorie deficit – eating fewer calories than they are burning.  They also stop eating when they are 80% full, lowering their intake.

Studies have also shown that eating slowly can reduce hunger and increase the feeling of fullness compared with eating quickly.

The FAST way to get healthy

Icarian Greek Orthodox Christians have many periods of fasting throughout the year.  Research during one fasting episode showed that it led to lower cholesterol and lower body mass index.  Intermittent fasting (fasting for a certain number of hours a day) or a specific diet that mimics fasting may have a similar effect.

Consuming one or two glasses of red wine per day is common in Icaria and Sardinia.  Two studies showed that moderate alcohol consumption is associated with slightly longer life.  However, these results cannot be replicated in other studies.  Indeed, most similar studies showed that higher consumption of alcohol actually increases the risk of death.

Exercise is built into blue zone people’s daily lives.  In Sardinia, this involves raising farm animals in mountainous regions and walking long distances.  One large study showed that the miles travelled each day, or the number of stairs climbed, could predict how long people would live.  Another study showed that vigorous activity leads to a lower risk of death than moderate activity.

In blue zones, people tend to go to bed, wake up and go to work at set hours.  Daytime napping (siesta) is also common.  Meta-analysis of 35 studies found that seven hours is the optimal sleep duration, and a lot less or more is associated with an increased risk of death.  Daytime napping is also great. However, the length of the nap appears to be very important.  Naps for 30 minutes or less may be beneficial, but anything longer than 30 minutes is associated with an increased risk of heart disease and death.

Blue zone people often live in religious communities.  This may reduce the incidence of depression.  Having a life purpose is also vital: this can reduce the risk of death through enhanced psychological well-being.  Living in extended families is also beneficial, with studies showing that grandparents who look after their grandchildren have a lower risk of death.

It is important that your social network is healthy: if your friends are obese, you have a greater risk of developing obesity, possibly because weight gain seems acceptable. 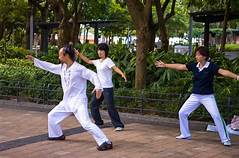 But baby boomers are not booming!

On the other hand, baby boomers, who expected to live longer and have fewer health issues, because they received optimal medical care under the NHS and full social support, have not done so well.

A London MRC study looked at men and women born between 1946 and 1964, now aged 60 to 64.  It found that the average of these baby boomers has two medical conditions at retirement age, the most common being hypertension (found in half), obesity (a third), high cholesterol (a quarter), and diabetes or prediabetes (also a quarter.)

A UCL study indicated that middle-aged people face even more years of ill health than baby boomers.  The study compared the generations born between 1945 and 1980 and found a greater prevalence of ill-health among those born later.

In our next blog, we will find out why the baby boomers have done so badly.

So, my friends, the oldest people in the world (in the blue zones) lead a healthy life, eating a plant-based diet, with regular physical activity, enough sleep, a good religious and spiritual life, and great family and social networks.  Incorporating these patterns of living into your days should add more years to your life – and more life to your years!

And it doesn’t all involve huge sacrifice – with olive oil, beans, enough sleep, and being sociable and active among the short-term recommendations for such vital long-term gains!

The baby boomers under the doctor at retirement