Cholesterol: the good, the bad, and the ugly truth!

There is good cholesterol and bad cholesterol, and knowing which is which, how to measure them and where they occur, is the key to health

Do you know your HDL and LDL levels?  Why is HFCS the perfect metabolic storm?  And which foods lower your bad cholesterol?  Cholesterol is not a simple matter – and even the medical profession has “got it wrong” until recently.  But straightforward changes to your lifestyle can guard against cholesterol’s highly harmful effects.

Helen, a 57-year-old lady, presented with frequent migraines and a long history of metabolic disease.  She described herself as having a sweet tooth, craving sugar and carbohydrates since childhood.  She had gained excessive weight, which reached obesity levels.  She had been on various diets over the years, with no success, and she had progressed to having high blood pressure, prediabetes, and very high cholesterol (7.2.)  She recently had two stents fitted for narrowing of her coronary arteries, which helped her symptoms of angina.  She has also been prescribed a high dose of statin.

Interestingly, Helen has a long history of gum disease – lasting most of her adult life.  This started with tooth pain and bleeding gums, and an awareness of having bad breath.  She has received 17 silver (mercury) dental fillings.  And she has had multiple courses of antibiotics for repeated gum abscesses.

We set up a plan for Helen not only to address lifestyle issues and improve nutritional status but also to address the periodontal disease and mercury toxicity that has contributed to her high cholesterol and vascular disease.

Andy was otherwise as fit as a fiddle

On the other hand, Andy, a 41-year-old gentleman who presented initially with vertigo, was treated in the ENT (Ear, Nose and Throat) department and given exercises to practise before getting out of bed in the morning.  Six months later, he started to have palpitations, headaches and dizziness.  As he was concerned about his family history, he measured his blood pressure at home and found it running high.

This happened in a patient who was otherwise as fit as a fiddle, with a body fat mass of 9% (athletic level) and a VO2 max at 52 (a high level of fitness.)  But, because he carried two risk factors (hypertension and high cholesterol) and a strong family history of heart disease, Andy underwent further investigation.

A CT scan showed a high calcium score (a sign of significant heart disease) at 398; one coronary artery was blocked by 35%.  A carotid scan revealed a 45% blockage of the main carotid artery on one side.

We ran a battery of tests to verify the genetic and environmental factors that contributed to high cholesterol and heart disease in Andy’s case. We are getting cholesterol wrong!

Following President Eisenhower’s heart attack in 1955, cholesterol gained a bad reputation as the sole cause of heart disease since cholesterol plaques are the hallmark of vascular disease.  On the assumption that fatty food was the culprit, a low-fat diet was recommended for six decades to protect the public against the number one killer, heart disease.

This harmed health in general as cholesterol is a crucial nutrient for healthy body cells (part of the cell membrane.)  Also, without cholesterol, the body cannot make essential vitamins such as vitamin D and important hormones – like the life-saving cortisol and sex hormones such as oestrogen, progesterone, and testosterone.

Despite following a low-fat diet and the wide prescription of statins, heart disease has risen not only in the developed world but also in underdeveloped countries.  This raised doubts about the low-fat diet advice and created massive confusion in the medical profession.

Indeed, a body of research has connected high cholesterol with a diet high in sugar and processed carbs, a lack of physical activity, associated it with obese or overweight people, and smokers or those who drink alcohol in excess.  It also runs in families.  But you can lower your cholesterol simply by eating healthily and exercising regularly.

Let’s learn about the cholesterol family

There are four main types:

Saturated fat and cholesterol are innocent!

One extensive meta-analysis of 72 studies enrolled 600,000 people confirmed there was no link between saturated fat intake and heart disease. The study found trans-fat harmful; however, omega 3 (fish oil) was protective.

Low HDL (the good guy) was the cause of the heart attack!

The research exploring the underlying cause of heart attacks found that only 10% of the participants had normal HDL levels at over 1.0 meq/L (60 mg/dl.)  This means that 90% of those who suffered a heart attack had a low HDL.  This makes a low level of the protector HDL the real driver of heart attacks.  The ratio of total cholesterol and HDL (similar) is a better tool to assess the risk of a heart attack.

Optimal levels of the protective HDL reduce cardiovascular risk more than low LDL.  HDL is like trucks that pick up damaged (oxidised) LDL and transport it to the liver to be cleaned up.

Research over 40 years eventually prompted the US dietary guidelines advisory committee to tell the public not to worry about dietary cholesterol, which was classified as “a nutrient of no concern” and accordingly lifted a 55-year recommendation of a low-fat diet.

Where, then, should our preventive focus be?

Let’s take the analogy of cars and passengers: lipoprotein particles represent cars while LDL cholesterol makes up the passengers.  We routinely measure the passengers, whilst ignoring the cars!  However, LDL-P (lipoprotein, cars) is the driving force for plaque formation.  More cars on the road increase the likelihood of accidents, i.e., the risk of heart disease.

Therefore LDL-P is more sensitive to predicting the risk of heart disease than LDL-C (LDL cholesterol.) 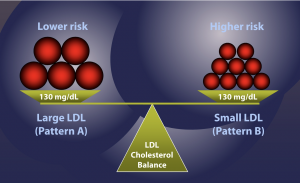 LDL particles are either large, fluffy, healthy beachballs or small, dense golf balls.  The latter can stick together to initiate the formation of clots.  This could result in an acute vascular event such as a heart attack or stroke.

Damaged or trans-fat, an industrial product, is a common cause of an abnormal lipid profile.  It is made by adding hydrogen to liquid vegetable oil to make it more solid.  Examples are shortening, margarine, commercial cookies, and fried food such as French fries and doughnuts.

Trans-fatty acids increase your total and bad LDL (the bad guy) but lower the protective HDL.  It also increases levels of triglyceride and lipoprotein (a) levels.  Trans fatty acids promote atherosclerosis by driving inflammation and oxidative stress, putting the person in line for heart disease.

If you want to prevent heart disease, then you must target the big elephant in the room!

There is solid evidence that the obesity, high cholesterol, and heart disease pandemic is triggered by high fructose corn syrup (HFCS) in fizzy and non-fizzy drinks, juices, cookies, and sweets. It is added to processed foods, including bread.  HFCS is produced from corn through a chemical process.  Unlike fruit sugar, fructose is not associated with fibre or nutrients.

When ingested in large amounts, HFCS turns the liver into a fat-producing factory, which usually results in fatty liver.  The liver moves excess fat to the body via lipoprotein vehicles making very dangerous small LDL particles; it increases your triglycerides and lowers your HDL.

It is the perfect storm for heart disease and heart attack.

Let’s deal with the bad stuff first.  Red meat should be limited to 100 grams per day but not every day.  Processed meats, such as burgers and sausages, are high in saturated fat.  Frying increases the energy density (fat in the food plus oil to fry the food) and the calorie content of food.  And sugar and high carbs, such as pastries, cookies, pasta and pizza, are also bad.

So you see, my friends, knowing your foods and sticking to a healthy diet, combined with a decent amount of exercise, can frustrate any bad cholesterol you may produce, and instead, recruit your good cholesterol to work on your behalf – setting you up for a long and healthy life!

Please share your thoughts and ask any questions on this subject – in the Comment section below is always best so that I can respond most quickly – and please do subscribe to the newsletter so that you don’t miss further vital information.  Thank you!