And the big, fat problem is that it can be more silent – and therefore more harmful – in lean, thin people!

Three patients visited the Vitality Clinic this week, two of them lean, presented with serious complications of hypertension.  The third patient was a mildly overweight gentleman who presented initially with a simple case of gout, incidentally, found to have high blood pressure and high cholesterol, and so he received treatment to prevent complications at an early stage.

Hypertension is unexpected and under-diagnosed in lean (normal weight) people, who, for this reason, can present with serious complications as the first sign of hypertension.

Research over the last three decades has suggested that lean people with hypertension had worse outcomes than overweight or obese people – in terms of heart attacks and strokes.

A study from the University of Michigan has found that a quarter of normal weight adults have a high risk of heart disease and hypertension.

Lean people may have less contact with the medical service and hence their hypertension will not be discovered and treated early, so when they do present, their complications are more serious.

Hypertension is more predictable in overweight patients, who normally present with other issues such as diabetes, gout or high cholesterol.  These bring them into contact with the medical service and their high blood pressure is picked up during their GP assessment – early on, before any serious complications arise.

Hypertension is a silent disease, mostly asymptomatic or with minimal symptoms.  Left untreated, it can increase your risk of serious complications, such as heart attack and stroke.

You can have high blood pressure for years without any symptoms.  But even without symptoms, hypertension can damage your organs.  Routine assessment can detect organ damage in the eye (ophthalmoscopy examination of the back of the eye), kidney (microalbuminuria) and peripheral nerves (neuropathy.)

In this article, we will discuss the serious complications of hypertension and who is most at risk.  We will see how we can detect hypertension early in people of normal weight.

You increase your risk of having high blood pressure if you are overweight, eat more salt and not enough fruit and vegetables (high in potassium), do little physical exercise, drink too much alcohol or caffeine, smoke, get too little sleep, suffer too much stress, if you have a relative with high blood pressure, if you are of Asian, African or Afro-Caribbean descent, or if you live in a deprived area. 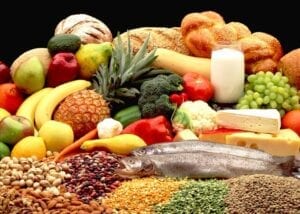 In fact, anyone can be at risk of hypertension: men are more likely than women to have high blood pressure, although after the age of 65, this is reversed due to the loss of the protective effect of oestrogen in females.

As our management of hypertension is mainly based around lifestyle adjustments, most patients would like to see the problem presented in a scientific way (lab results) before they become fully committed and motivated enough to take action!

“I can’t imagine living the rest of my life not eating bread, sugar or cheese or enjoying a glass of wine”

They are obviously talking about their present taste buds, which can only taste sugar and salt.  This will change when they start eating healthy real food.  They will then reclaim their other senses of taste, such as sore and pungent.  Similarly, I have met many ex-smokers who are unable to stand cigarette smoke.

Sticking to a healthy lifestyle will be much easier when they consider the great benefits they are going to reap – winning against disease, clearing their family’s legacy of illness, and extending their good quality of life, going on to be fully functional and independent into their 90s.

I found that many people make a successful transition when they understand their true purpose – like leading the rest of their family into the safety of health and well-being.

I was very impressed by one patient who wanted to put his three children onto the right path for health, and give them the motivation to continue along it for the rest of their lives.

I have met patients who made these changes and who are now well enough not to take their pills, and some are able to give up their overnight CPAP, as they recovered from sleep apnoea.

In the first of our three cases, this 66-year-old gentleman had major surgery for a massive aorta dissection two years ago, complicated by a stroke.  He was diagnosed with very high blood pressure and prescribed multiple pills to control it.  The extension of the dissection stopped blood running in the right leg artery.

He had normal bladder and bowel function.  His sexual dysfunction was prescribed phentolamine and Tadalafil in a private clinic.  He suffered with acid reflux, and had a tendency for constipation since childhood.  He took lemon in hot water, together with flax seed, in the morning to help constipation.

His energy levels dropped after meals but generally stayed around 5/10 most of the day.  He has worn two hearing aids for the last five years.  He smoked rolled tobacco in the past but nothing in excess.  He had a football injury (broke left fibula) 40 years ago, and played football until his early 60s.

He had a patch of ‘coffee au lait’ on the inner aspect of his left elbow.  He had receding gums, 10 white fillings and 4 crowns (the patient likes sweets, chocolates and cakes, and hates healthy food.)

Neurological symptoms down the left half of the body are consistent with a stroke.  Initially the patient could walk few steps with a stick and minimal support.

The diagnosis was acute aortic dissection which extended from the arch down to the pelvis, was complicated by ischemic cerebellar stroke, and he had intermittent claudication (calf cramps) – due to diminished blood supply to the muscles, which stops him walking more than a few steps due to the accumulation of lactic acid.  There was also sleep apnoea, metabolic syndrome (high BP, fatty liver), sexual dysfunction, minor faecal incontinence, and peripheral neuropathy (distal feet). 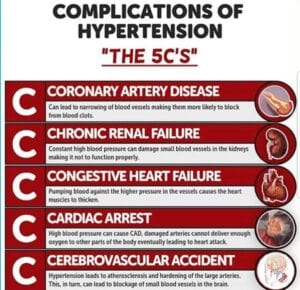 How does sleep apnoea raise your blood pressure?

Normally your blood pressure falls at night, but may not if you have sleep apnoea.  Every time your oxygen drops, this causes stress hormone surge that raises your blood pressure.  Hypertension and apnoea share a remarkable number of risk factors, e.g. obesity, smoking, caffeine and alcohol consumption.

An unpleasant burning sensation in her lower legs

This lady was known to have ‘white coat’ hypertension, so a 24-hour monitor in 2002 reported slightly raised blood pressure, but no action was taken.  Her blood pressure was found to be high in 2009 when she presented with a stroke.

The stroke was associated with an aneurysm, resulting in right leg and hand weakness.  This cleared within three months and she was able to walk with little support.

Two years later, she started to experience an unpleasant burning sensation in her lower legs.  She didn’t feel centred, was dragging the right leg and found it hard to keep her balance whilst walking.

She did not bother to cook and was on limited food options, did not consume enough fruit and vegetables, and enjoyed a treat of chocolate in the evening.  She had six hours of interrupted sleep at night, often had difficulty staying asleep.  She kept a steady weight most of her life, but had recently gained a little weight.  Her father died of a heart attack whilst having a cancer operation.

She had upper and lower dentures for back teeth.  Her weight was 46.3kg, height 165cm, BMI 17.0 (underweight.)  Her waist was 27.5 inches, hip 33.2 inches, making her WHR 0.83.  Her pulse was 72, blood pressure 132/82.  She had an enlarged, fatty liver, and an abnormal sound in the upper abdomen – suggestive of narrowing of kidney artery.  A renal ultrasound scan showed normal kidneys, and no evidence of renal artery stenosis – another cause of hypertension.

Her main problems were hypertension, balance impairment due to the stroke, peripheral neuropathy with burning sensation in the legs, and metabolic syndrome (high BP, fatty liver.)

The third patient presented to his GP with a painful big toe.  Tests confirmed high uric acid level and the diagnosis was gout.  The GP observed his blood pressure running high around 150/90.  Other routine blood tests confirmed high cholesterol at 6.6 (normal is 5 or less.)

He was prescribed Allopurinol but was not keen on taking it.  His health was good until a few months ago.  He enjoyed a western diet of cereals, dairy and fried food; he slept six hours a night, with episodes of insomnia; he felt tired first thing in the morning, and his energy level was about 6/10 most of the day.

He went on a healthy diet of real food options and adopted intermittent fasting (6pm to 10am), lost 2 stone in weight (from 13 to 11 stone), aiming to regain his ideal weight of 10 stone.  His energy is a lot better and steady at 8 out of 10 most of the day.  He is sleeping better, a good 7 hours per night, and feels fully refreshed in the morning.  Epsom salt baths help him sleep better.

However, he continued to monitor his blood pressure daily and was very pleased to see the trend going downward to a normal level. 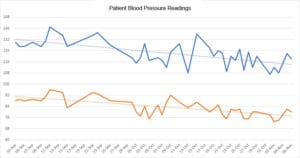 High blood pressure can cause damage all over the body

In some cases, it can quietly damage your body for years before symptoms appear.  Narrow coronary arteries can result in angina or full-blown heart attack.  In the brain, you can get transient ischaemic attack (TIA) – temporary blockage of an artery or full stroke, can also cause mild cognitive impairment or full dementia.  In your aorta, pushing blood at high pressure can result in partial tear to the artery wall resulting in an aneurysm.

In the kidney hypertension causes scarring of the kidney (glomerulosclerosis) that often progresses to renal failure (ESRF) requiring dialysis.  Hypertension can cause small bleeding or infarction on the retina – the light sensitive area at the back of the eye, and bleeding into the optic nerve can result in vision loss.  It can also cause sexual dysfunction in men and women due to reduced blood flow.

All three of the above cases shared a western diet of processed, highly refined food, a low intake of fruits and vegetables, a genetic tendency to a high level of inflammation, high oxidative stress and impaired detox pathways, a possible high toxic load (multiple silver fillings), and low vitamin D (i.e. they all lived in England!)

The answer, as almost always, my friends, is to eat more healthily, reduce alcohol, lose weight if you’re overweight, exercise regularly, cut down on caffeine and stop smoking.

And if you have any questions – or would like to share your experience of hypertension (whether you are lean or not!) – then I would be delighted to hear from you.  And your contribution may help someone else along their path to longer, healthier life.