Our genetic makeup and personality traits do play a role in metabolic syndrome, but we can still help ourselves

Many people believe that their genetic makeup and personality traits inevitably predispose them to metabolic syndrome – “I’ve got a sweet tooth,” “I’m naturally heavy-boned.”  Whilst it may be more difficult for some people to avoid metabolic syndrome than others, no one has to suffer from it.

By now, my friends, you will know that the health conditions associated with metabolic syndrome include atherosclerosis (hardened and partially clogged arteries, which can lead to heart disease and stroke), hypertension, dyslipidaemia (your lipid imbalance), sleep apnoea, PCOS (Polycystic Ovary Syndrome) and periodontal disease.

Insulin resistance is a condition that is a major factor in metabolic syndrome, and it is skyrocketing in the western population, affecting 1 in 3 people, driven by poor diet and a sedentary lifestyle.  Insulin resistance is particularly interesting for us to consider, however, since it is caused by the relationship between our genes on the one hand and our lifestyle and environment on the other.

This article will examine the impact of personality traits and genetic variants on the development and progression of insulin resistance and metabolic syndrome.

What is insulin resistance?

Insulin is a hormone secreted by the pancreas, which helps your body’s organs – the liver, muscles and cells – take glucose from the blood.  Insulin resistance occurs when these organs no longer respond efficiently to insulin and therefore do not easily take glucose from the blood.  As a result, the pancreas makes more insulin to help glucose enter the cells.  Your blood sugar starts to rise.  Insulin resistance progresses initially to prediabetes (metabolic syndrome) and then if you fail to make appropriate lifestyle changes, to type 2 diabetes.

How do we investigate insulin resistance?

To investigate insulin resistance, we look at your Adiponectin level, the Homeostasis Model Assessment of Insulin Resistance (HOMA-IR), which is a combination of fasting insulin and blood sugar levels, fasting insulin/ 2-hour post-prandial insulin, assessing elevated free fatty acids, Oral Glucose Tolerance Test (OGTT) before and after a load of glucose, elevated blood glucose and haemoglobin A1 C, these being late features of insulin resistance, inflammatory markers hs-CRP and homocysteine, and the CV health panel (the full lipid panel of cholesterol and particles.)

Extra genetic tests we perform at the Vitality Clinic

When does irreversible type 2 diabetes occur?

As we have seen, insulin resistance happens when the energy flow into the cells slows down, resulting in raised blood sugar.  This prompts the pancreas to pump more insulin to compensate, opening more doors to push more sugar into the cells.  The process continues until the pancreas reaches a state of extreme exhaustion and can no longer produce insulin.  High blood sugar becomes permanent, at this stage, resulting in type 2 diabetes.

A person with insulin resistance who continues to make plenty of insulin will avoid type 2 diabetes.  However, the increase in the amount of insulin secreted by the pancreas, coupled with the decreased uptake of sugar by the muscles and adipose tissue, can lead to cardiovascular disease, polycystic ovary syndrome, fatty liver and other expected features of metabolic disease. 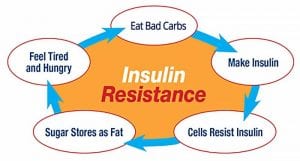 Having established what insulin resistance and metabolic syndrome are, let’s turn our attention to possible causes in personality traits and genetic variants.

Are you a type D personality?

A Dutch community study concluded that type D personality is associated with an increased risk of pursuing an unhealthy lifestyle and having metabolic syndrome.  This suggests biological and behavioural factors combine to give birth to the metabolic disorder.

The terminology “type D personality” is commonly used in psychiatry to describe a person who has the constant tendency to experience negative emotions whilst also being unable to share them for fear of being ridiculed or rejected.  The prevalence of type D personality is around 21% in the general population but far higher among heart disease patients.

A seven-study meta-analysis examined the effect of the type D personality profile on diabetes.  Not only was the type D personality very prevalent among diabetic patients, but it was also a predictor of poor adherence to medications and a pattern of unhealthy behaviour.  It also resulted in negative health consequences such as depression and anxiety.

A larger (5,662-person) study in Sardinia, Italy, found neuroticism and low agreeableness were associated with metabolic syndrome, but that high conscientiousness was protective against it.  The study involved the completion of a comprehensive personality questionnaire in adults over 45.  Those who scored in the top 10% on conscientiousness were approximately 40% less likely to have metabolic syndrome, whereas those who scored in the bottom 10% on agreeableness were 50% more likely to have it.

Recent studies have documented the high incidence of metabolic syndrome among psychiatric patients.  This has become the greatest challenge in psychiatric practice.  Besides the side effects of psychotropic drugs, factors such as genetic abnormalities, high inflammation, and unhealthy lifestyle contribute to the association between metabolic syndrome and a number of psychiatric disorders.

In a meta-analysis, a total of 25 genes were reviewed in 88 studies.  Nine variants in seven genes (GNB3, PPARG, TCF7L2, APOA5, APOC3, APOE, CETP) were more prevalent in subjects with metabolic syndrome.

Insulin resistance in skeletal muscle is a key feature of the pre-diabetic (metabolic syndrome) state and a predictor of type 2 diabetes.  Insulin resistance here has been attributed to different pathological conditions such as mitochondrial dysfunction, impaired storage of sugar (glycogen), and the accumulation of fat (diacylglycerol) in muscles that interferes with insulin signalling.

Insulin resistance happens due to the re-distribution of lipid stores from adipose tissue to non-adipose tissues (skeletal muscle, liver and the insulin-producing β-cells of the pancreas), the so-called ‘overflow’ or ‘ectopic fat distribution’ hypothesis.  In support, studies have reported a strong correlation between intramuscular triacylglycerol (IMTG) content and insulin resistance.

However, intermuscular fat deposit (IMTG) also happens in endurance-trained athletes who are known to be highly insulin sensitive.  This suggests that it is not the IMTG content that is the important factor in the development of insulin resistance but the capacity of the muscle to burn fat.

This study provides compelling evidence that the activation of genes involved in lipid metabolism and in the regulation of autophagy and mTOR signalling can result in increased insulin sensitivity in skeletal muscle.  This opens new treatment options such as fasting and exercise.

A study revealed that the suppression of NAT2 was associated with insulin resistance in humans.  Suppression of a similar gene, NAT1, in mice caused metabolic syndrome with decreased insulin sensitivity, higher blood sugar, fasting insulin and triglyceride.

Suppression of the expression of NAT1 gene in mice interfered with mitochondrial (energy plants) function, which produces ATP, the energy currency of cells.

The study demonstrated that if NAT1 were eliminated, the mice gained more fat, as they could not burn it, and their inflammation markers rose compared with the control group.  The eliminated NAT1 mice could not keep up with normal mice on the treadmill, indicating poor mitochondrial function (poor energy production) as part of the insulin resistance.

What is type A insulin resistance syndrome?

This can affect adolescent females, causing the delayed onset of menarche (primary amenorrhea) or light and irregular periods (oligomenorrhea.)  They can also develop cysts in their ovaries and excessive body hair growth (hirsutism.)  Most affected females also develop a skin condition called acanthosis nigricans, in which the skin in the body folds and creases becomes thick and dark.  Unlike most people with insulin resistance, females with type A insulin resistance syndrome are usually not overweight.

The features of type A insulin resistance syndrome in affected males are more subtle.  Some males have low blood sugar (hypoglycaemia) as the only sign; others may also have acanthosis nigricans.  In many cases, males with this condition come to our medical attention only when they develop diabetes mellitus in adulthood. 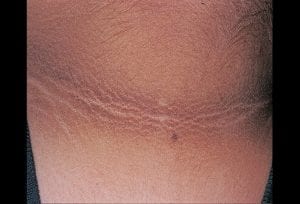 How genetic variations can cause metabolic syndrome

Apolipoprotein E (APOE) is primarily involved in lipid metabolism but has also been found to play a significant role in insulin resistance.  Excess fat accumulation in cells via APOE pathways may result in insulin resistance and the impairment of fatty acid oxidation.  Some studies have suggested that APOE gene variations may influence other metabolic syndrome risk factors, such as obesity and abnormal lipid profiles.

If you a sweet tooth, blame your liver

A Danish study found that a hormone called FGF21, secreted by the liver after eating sweets, may determine who has a sweet tooth.  People with FGF21 gene variants were 20 per cent more likely to consume larger amounts of sweets, chocolate, cakes and ice cream than their counterparts in the study.

The University of Copenhagen study highlighted the role of the liver in controlling what we eat.  The researchers speculated that the liver could also secrete other hormones that guide other food choices.  They also suggested satiety may rely on different pathways, which control different types of nutrients.  The FDF21 sweet tooth gene was found to be highly associated with metabolic conditions such as obesity and type 2 diabetes.

How can I become insulin sensitive again?

Again, my friends, the solutions to insulin resistance will not surprise you.

So, I would respectfully conclude that, although our risk of suffering from metabolic syndrome can be increased by our genetic make-up and personality traits, we can still take power back into our own hands by following the straightforward guidelines above.

Please do share your thoughts and questions by commenting on this piece, and do subscribe to the newsletter so that you don’t miss further vital information.  Thank you!

The clinical link between type D personality and diabetes

Metabolic syndrome in psychiatry: advances in understanding and management

Genetic variants and the metabolic syndrome: a systemic review

Genetics of insulin resistance and the metabolic syndrome

Got a sweet tooth? Blame your liver